On 24 September 2020, the Federal Court ruled that Qantas misinterpreted S 789GDA of the Fair Work Act when calculating JobKeeper payments. This is a landmark win for USU/ASU members at Qantas. 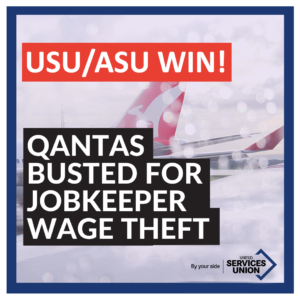 Our national union the ASU, along with the FAAA and TWU, brought the case after Qantas short-changed employees over penalty rates earned on the Easter Long Weekend. Qantas minimised the amounts paid to employees by counting penalties paid on a later payday towards the $1500 JobKeeper payment for that later fortnight.

This table prepared by Justice Flick illustrates how the Court says that JobKeeper works:

Qantas has 28 days to appeal this decision. We’ll fight this all the way if we need to.

The USU/ASU is calling on Qantas to accept the Federal Court’s Decision, and not appeal.  This is money stood down Qantas workers desperately need. Qantas should do the right thing by its workers and promise to pay you what you are owed as soon as possible. This is money that Qantas workers will spend in their local businesses, helping our economy to bounce back as soon as possible.

We’ll be reaching out to Qantas to discuss our next steps. More information to come

Speak to your organiser for more information: