The USU’s Summer 2022 edition of United has been sent to members. Check it out. 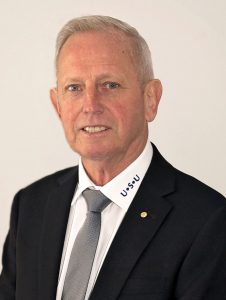 Graeme Kelly OAM USU General Secretary: “On behalf of President Glen McAtear and the USU Executive I wish all members and their families a safe and Happy Christmas and a respectful 2023.”

It has been quite a year! As life has started to get back to normal we have been able to focus more on the future.

It has been a struggle for many but we have had some remarkable highlights, one being the election of a federal Labor government, led by Anthony Albanese.

This election result changes the focus for many Australian workers as this government moves forward on significant Industrial Relations reforms that will see Australian workers have a greater say while also protecting important values such as the BOOT (Better Off Overall Test) being applied to all agreements protecting workers across all sectors.

Crucially we now have a federal government that embraces rather than fights wage increases – especially for Australians most in need. We have a government that will listen to workers and their unions.

The key to a better future is decent wages that keep up with the cost of living. How do we do that? In local government we will be negotiating Award 2023.

We also need to make sure our sector remains sustainable.

In September, I was part of a national delegation that met with Prime Minister Anthony Albanese, Minister for Skills and Training Brendan O’Connor, Ministers for Local Government Catherine King and Kristy McBain seeking increased funding for local government and significant investment in skills and training.

At our National ASU conference held in November I moved a motion on Local Government Financial Sustainability. In summary the motion read:

“The ASU recognises that the financial sustainability of local governments across Australia continue to be a challenge and has been undermined by Commonwealth funding arrangements that are no longer fit for purpose.”

The National Conference endorsed a commitment to lobbying the federal government to implement measures aimed at improving the financial sustainability of local government:

We are always by your side.