On behalf of the Executive and staff of the United Services Union, I’d like to ask you to join me in saying thank you and congratulations to Graeme Kelly as he celebrates his 30th anniversary with the Union, and his 10 year anniversary as General Secretary, both today. 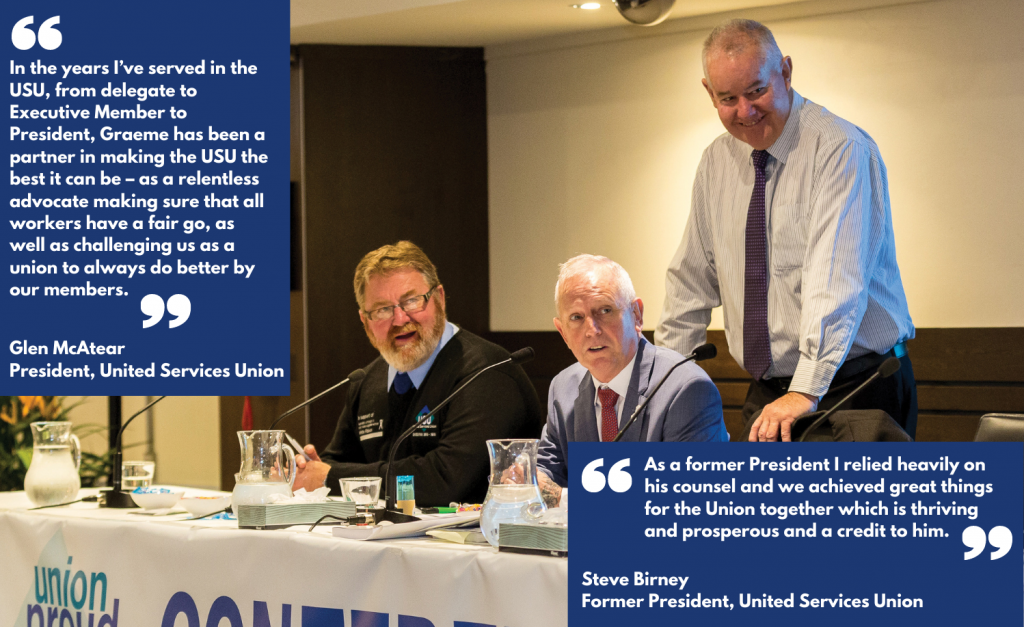 In 2019, Graeme was awarded an Order of Australia Medal for his contributions to industrial relations in Australia. Today Graeme celebrates 30 year anniversary working for the United Services Union and his 10 year anniversary of being appointed (and later elected, twice) General Secretary. It would be hard to overstate just how important his contribution has been, for the old MEU, the USU, and for workers across New South Wales and Australia.

That his 30 year anniversary working for the Union and his 10 year anniversary as General Secretary are on the same day is a remarkable coincidence, and gives us a great opportunity to say congratulations, and thank you for his service to this union. From a delegate at Canterbury Council, to an organiser, Southern Regional Manager, and General Secretary, Graeme’s path has seen him rise to the top of our Union and the top of Australian Trade Unionism, without ever losing sight of our membership, and what it means to serve them.

In the years I’ve served in the USU, from delegate to Executive Member to President, Graeme has been a partner in making the USU the best it can be – as a relentless advocate making sure that all workers have a fair go, as well as challenging us as a union to always do better by our members.

So please join me in saying thank you and congratulations to Graeme for the vision, hard work, and grit that have marked his time at the MEU and USU, from delegate to General Secretary.

Graeme, you have made this Union what it is today – the mighty USU. We look forward to many more years of your continued leadership.

Graeme is someone who may never have aspired to be the leader of the Union but he is a born leader and his leadership qualities are outstanding. Graeme’s ability to rally people around him of a similar/like mind is remarkable, and they, like he want the best for everyone else. Graeme came from a background of local government but he wanted to ensure that the workers were looked after and protected and the opportunity to do this came to fruition when he went from member, to delegate, to starting to work for the union 30 years ago through to ultimately becoming General Secretary ten years ago.

When it comes to being able to a lead the Union Graeme would say that he had a great deal of support but I believe that it could not have been done without him. As a former President I relied heavily on his counsel and we achieved great things for the Union together which is thriving and prosperous and a credit to him.

The Union went through some difficult stages and at times there were difficult decisions to be made but Graeme has made the Union a more credible place. He is honest and his integrity is unchallenged. He has never lied nor mislead me, and I trust him and his judgement implicitly.

Graeme maintained a sense of humour that even in the most difficult of times helped to keep the reality of the situation in hand.

Thirty years is a significant achievement and Graeme is to be congratulated for his great efforts in such a difficult environment as the trade Union movement.

Congratulations on your achievements Graeme and I hope that you are able to represent our members for many more years to come. 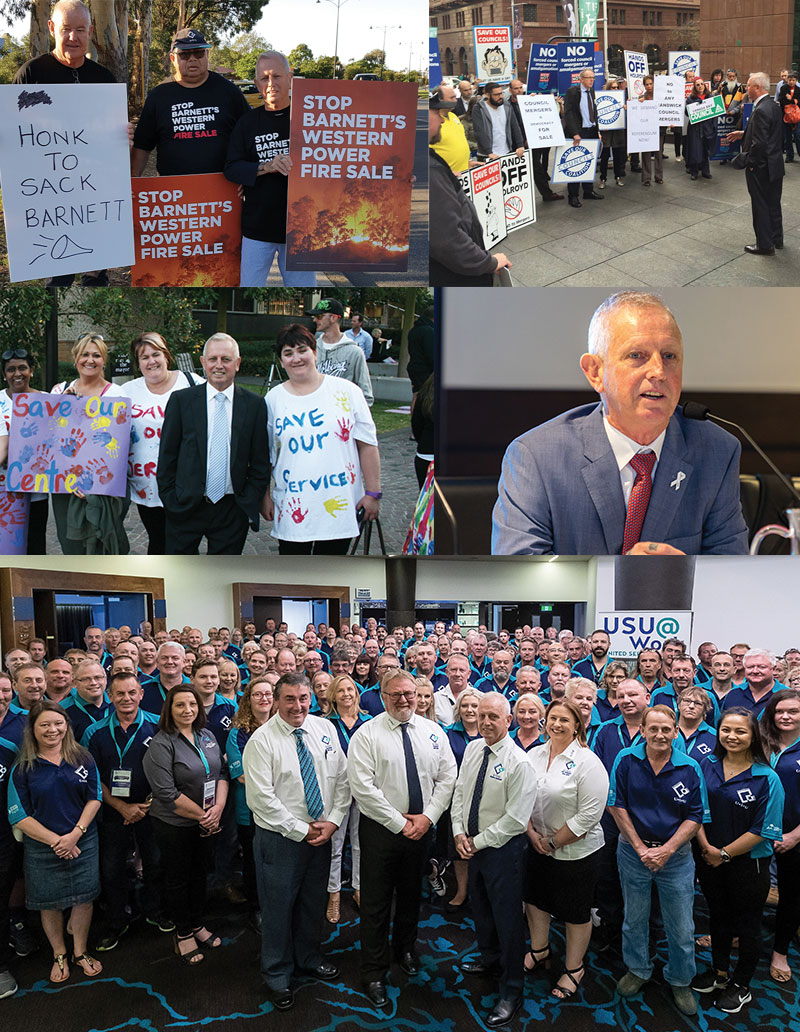 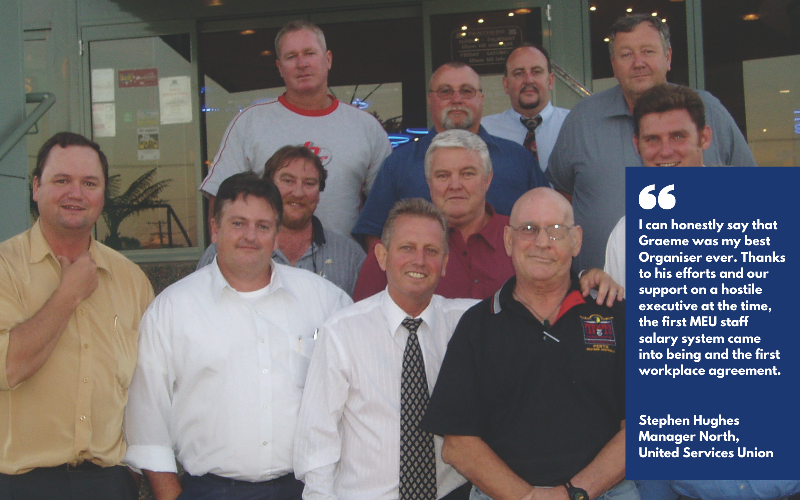 I met Graeme Kelly in 1991 when he attended my local Council (Narrabri) union meeting for the then MEU.

Back then we only saw our Organisers usually each six months when they travelled out bush for their twice a year regional itinerary.

I became a Delegate in 1985 when I became permanent on Council.

I can honestly say that Graeme was my best Organiser ever.

He cared and never bulls&#tted.

I value these traits and have followed Graeme’s example.

Graeme returned to the MEU head office in Sydney after the initial vote on the 1992 award where his Councils voted against the first version of the award because it would have sold many members out.

He told us what he thought about the package that he was directed to recommend to us and we appreciated  that he didn’t recommend the first version.

How he managed to keep his job under the old regime after that i don’t know.

We then fixed the award problems and voted the second version in.

Graeme headed up the first MEU staff committee when Steve Birney and i were elected onto the State Executive in 1993.

Thanks to his efforts and our support on a hostile executive at the time, the first MEU staff salary system came into being and the first workplace agreement.

Since becoming General Secretary Graeme allowed for relationships with other political parties to be established which have greatly protected our local government members.

He worked to tidy up the federal ASU to make it a better organisation.

Without Graeme I would not have been here to do my job.

Graeme has made our Union a far better Union than what he started at and what he inherited when he became General Secretary.