In our last newsletter on the 20 January we informed members that the ASU made application to the FWC regarding a lack of consultation by Auscript regarding the office closures and redundancies.

At this Conference the ASU submitted that Auscript had not properly consulted the Union or its employees at all, and that in most cases employees only had 48 hours to decide on critical issues such as redundancy, re-deployment, relocation and re-training, while trying to seek financial advice and talk to the Union. An impossible task the ASU argued in this very narrow time frame.

The Commissioner has thus recommended to the parties that they should meet and develop an agreed arrangement for consultation in the future and then Report Back to the Commission on the 13 February (see attached Notice of Listing). To that effect, Michael Rizzo, ASU National Industrial Officer, has organised to meet Auscript in Brisbane on Thursday 6 February. The ASU will seek to have an agreed consultative Memorandum of Understanding (M.O.U) with Auscript. The ASU never again wants to see employees at Auscript treated so poorly.

Report back to the FWC on 13 February

The ASU will inform the Commission on the outcome of the meeting with Auscript on the 13 February. Following this Conference the ASU will then report back to members any major developments.

For more information, please get in touch with the relevant contact below. If you’re not a member of the USU/ASU, you can join online now at our secure form: usu.org.au/join

Report Back to FWC regarding consultation process with Auscript 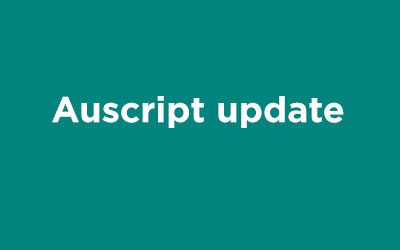