We are not backing down at Apple! 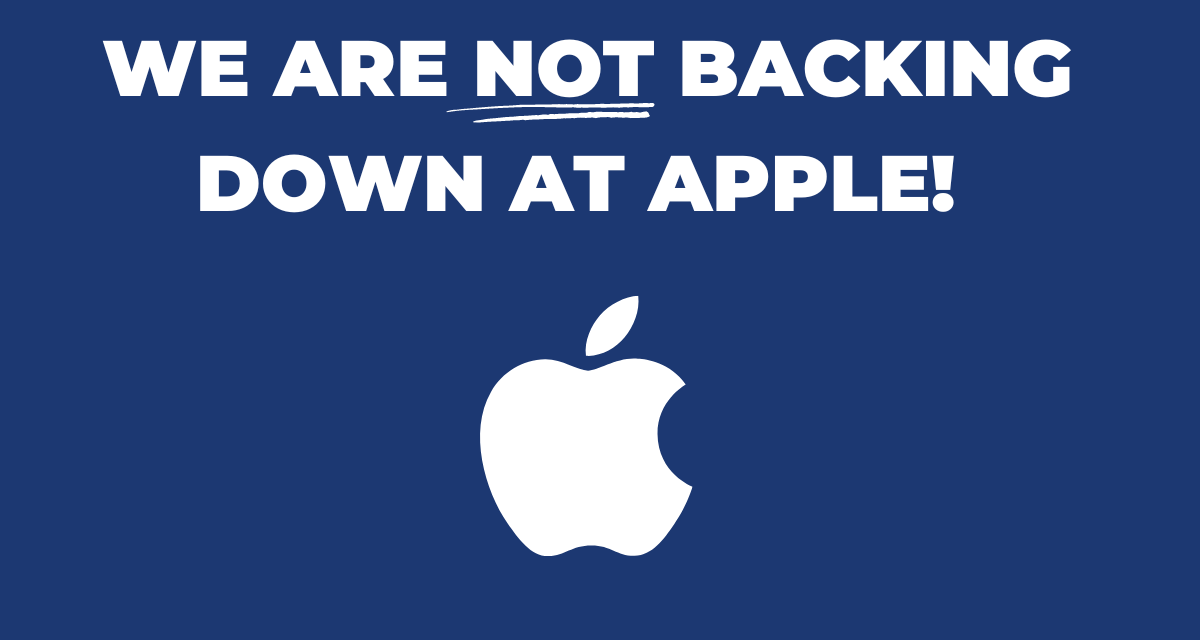 This week your union had our Good Faith Bargaining Application heard by the Fair Work Commission in Sydney.

Your union was successful in securing further bargaining meetings with Apple and that these meetings shall be good faith in nature. We will be meeting with Apple two further times this week and will make it clear to them that bargaining does not just end because these meetings have been held. We have also secured agreement that Apple will provide 72 hours’ notice before proceeding to open the access period prior to any vote.

Additionally, Commissioner McKinnon stated that the best approach for Apple to build trust would be to engage in good faith and to operate with ‘no surprises’.

Bargaining Update
The parties agreed in the Fair Work Commission to meet on Tuesday 11th and Thursday 13th of October for 3 hours per meeting. During the most recent Tuesday meeting we discussed Union Rights, including the right for Delegates to have paid training leave to properly represent their members as well as the right for new staff to attend a union induction. While Apple would not commit to providing a principled or firm response, they did agree to consider this item further and requested additional information from us.

Shift penalty rates made up the bulk of the discussion during this meeting with Apple repeatedly saying worse shift and penalty rates on offer are justified by the “the totality of the Agreement”. Whether employees are better off than the relevant Award will be for the Fair Work Commission to decide. We don’t think it will work and Apple should be clear and state the minimum Award wages and conditions in the Award (or better in every respect!) instead of setting off Award conditions with what it says are above Award wages, which is at best confusing and at worst misleading.

As has been the case with prior NEA meetings, not all items on the agenda could be covered in depth, leaving several items outstanding, including whether Apple will commit to further meetings next week if items on the Log have not been adequately discussed and responded to, with time in between meetings so that your union representatives can assess information provided by Apple often the night before the meeting.

Next Steps
We have agreed to next meet this Thursday 13th of October to discuss a range of items including classifications, wages, exemption salaries and part-time work claims. We will keep you updated as we progress through these meetings and will look to hold a Members Meeting via zoom in due course. While we are doing all we can to keep Apple at the negotiating table, members will recall from Apple’s past behaviour that a vote on the proposed NEA is looming.

Stronger together!
If you know of a colleague who isn’t yet a union member, forward them this email and encourage them to stand with us for better pay and join our union.

We get the best results when we’re strong in the workplace.