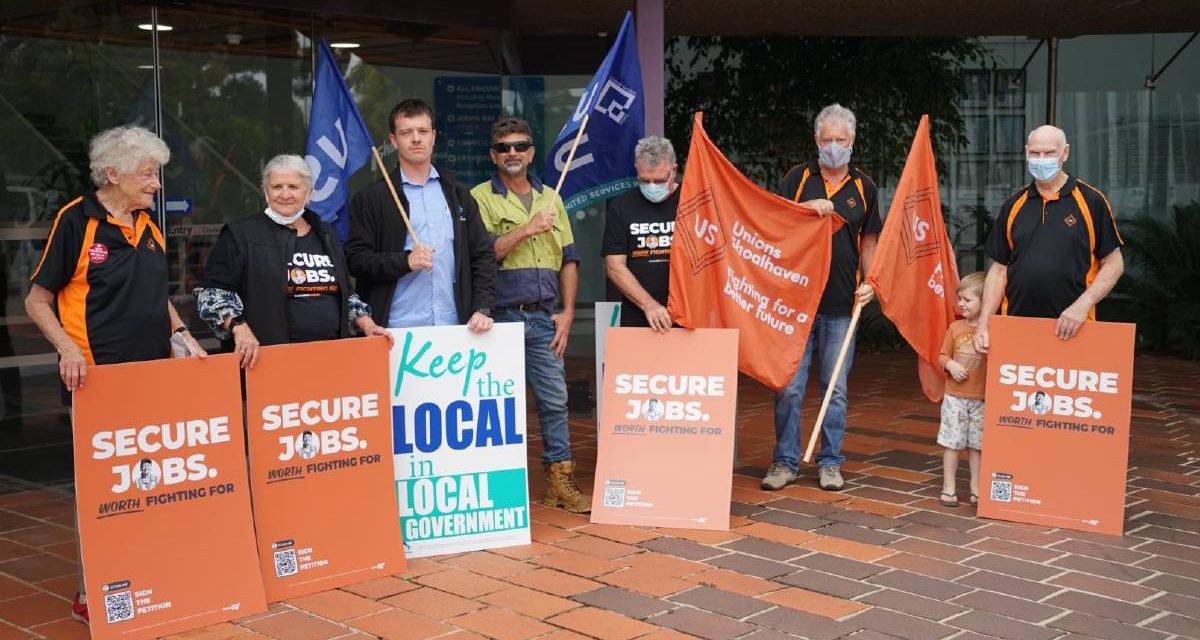 The decision to outsource public toilet cleaners will free up $400,000 in council’s budget according to Shoalhaven Mayor, Amanda Findley.

But the work should be carried out by council workers, according to unionists, who fear the decision may lead to outsourcing secure council jobs in the future.

“If you start contracting out core work like that, where does it stop?”

Union leaders gathered outside Shoalhaven’s council chambers on Monday to protest a proposal to outsource cleaning the region’s public amenities.

But council papers said discussions between management and staff identified challenges with the service, including it taking precedence over other maintenance work, with skilled employees often finding themselves cleaning toilets for long periods of time.

The seasonal nature of the work – which has a higher demand in summer and on weekends, but was much quieter during winter – also made permanent nine-day fortnight staff arrangements challenging.

Cr Findley supported the work being managed through contract.

Outsourcing the work will save council $400,000 in wages that can be directed to other areas of high priority, like repairing extensive road damage after the recent severe weather, Cr Findley said.

“The wages saving comes because council is currently paying people who have higher pay grades, like mowers and maintenance men and women, to clean toilets,” Cr Findley said.

“I supported this two-year contract to clean amenities as it frees up an annual amount of $400,000 plus, that can be spent on other maintenance like roads.”

Council noted the arrangement would not displace existing council staff, and that council staff would be available to respond to emergency repair works and ad hoc cleaning during high service demand.

“A lot of the time these roles have been effectively established for employees who may be moving towards retirement, who may not be able to do the physical capabilities of some of the labouring positions,” Stuart said.

“Councils are major employers of pretty much all regional communities and by losing those jobs to private companies, there’s a broader economic impact because those wages may not necessarily be spent in the area.”

But Cr Findley expressed confidence the contractor would hire locals to do the work.

“I have a high expectation that the contractor will hire local people and pay proper wages and this will be scrutinised alongside with job quality as the contract commences,” Cr Findley said.

“As no council staff were losing their jobs, it felt like a no-brainer for me to seek the savings in these tough economic times and apply the savings to other things.”

Councillor Greg Watson took issue with the proposal and believed outsourcing workers could impact the standards of the region’s amenities.

“After the labour hire people took over, the cleanliness of our facilities went down quite dramatically,” Cr Watson said.

“I don’t really support outsourcing these types of functions.

“You can put all the caveats you’d like in a contract in place, but the reality is that it does not deliver the sort of cleanliness of these facilities that we can achieve using our own workforce.”

The contract will be reviewed by councillors in two years.