More Powerful Together: the Future of Virgin 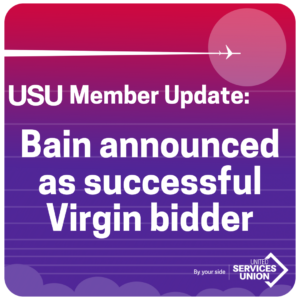 We know that the last couple of months have been incredibly stressful for you, but a successful bidder for Virgin – Bain Capital has now been announced and we are in the final stages of administration. This stage is the most critical – it’s where the administrator and the bidder prepare the final bid and the administrator works with creditors ahead of the second meeting of creditors. This meeting is currently scheduled for late August.

The USU/ASU and all unions have been engaging with bidders, the administrators and management to understand what their plans for the future of the company are and putting forward the case for retaining as many jobs as possible. We have a written commitment from Bain Capital that they will honour 100% of employee entitlements. They have also committed to work closely with the USU/ASU and other unions on your conditions of employment going forward.

Bain has a plan to keep Virgin flying, but as you know there is still much uncertainty in the aviation sector and we know substantial government support will be critical.

This is why we are calling on Virgin’s successful bidder Bain to sit down and engage urgently with the Federal Government on an Aviation Keeper package to protect jobs.

If you haven’t signed the petition yet – make sure you do this right away and get all of your colleagues, family and friends to sign and support our call for Aviation Keeper Now: https://bit.ly/aviationkeepernow

Together we need to keep the pressure up to get that support from the Government.

The next stage of the administration process

We now need to be organised and prepared for the second meeting of creditors. This is where all the creditors, including you as employees, airports, aircraft lessors, banks, and bondholders vote to determine the future of the airline and whether they approve arrangements for the sale to Bain Capital. We know that our preference and yours is for Virgin to keep flying. We want to maximise jobs, maximise wages and conditions, and ensure that every worker who stays working retains their entitlements and that any worker who loses their job receives 100% of their entitlements paid. But not every creditor feels the same way. People who lent Virgin money would rather just take what they can get without having any real concern whether or not Virgin keeps flying.

Together, workers have the strongest voice in determining the future of the airline but only if we work together and stay united.

At the second creditors meeting there will be a vote to either sell the airline to the final bidder or to send the company into liquidation.

The ASU and all other unions want to keep Virgin flying, and your vote will be critical to ensuring that Virgin keeps flying. But we don’t know whether the other creditors will agree.

The employee vote is a count of both number of votes and value of owed entitlements, and we have the largest number of votes – but only if we all vote, and all vote the same way.

All creditors will be given a minimum of 5 (five) days’ notice of a second meeting to prepare. At this time, the Administrator, Deloitte, will send creditors:

It will be critical that you give your proxy to the USU/ASU’s representative Emeline Gaske to ensure that Virgin keeps flying and protect the airline from bondholders who would rather raid the assets for a quick buck.

We will let members know when the next meeting date is confirmed – so make sure you watch out for our union notices about completing your proxy in this next important stage of the administration process.

Together, we can ensure that every worker gets what they are owed and Virgin puts planes back in the air.

We are by your side

For anyone who is not yet an USU/ASU member – it is not too late to join. Sign up now to make sure you are supported and represented throughout this process: www.usu.org.au/join

We know this is a difficult time, but your union is by your side. We will continue our fight to keep Virgin flying.