Help Save Aviation in Australia

You will have heard yesterday that Virgin Australia has gone into voluntary administration.

The USU/ASU has been working hard since the COVID-19 crisis began to protect the jobs and entitlements of all of our members in airlines, and to save Virgin Australia and the jobs of 16,000 people who work there.

Yesterday’s announcement is devastating for all our members across airlines who want to see a vibrant and successful aviation industry in Australia.

What we know so far is that:

It is not too late for the Government to step up and save Virgin Australia.

Now is the time for workers across the industry to pull together, not let the bosses and government pit us against one another. It is important for all aviation workers that there are two strong airlines in Australia.

The airline industry across the world is under siege. Governments around the world are stepping up to save airline workers’ jobs. The Morrison government needs to do the same.

The Morrison government is at a crossroad.

They can choose to invest tax payer money in buying a stake in an airline that will save jobs, make it Australian owned and allow Australia to avoid becoming a country with one all-powerful corporate airline in control of the skies. Or sit back and watch as 16,000 jobs are destroyed, tax payers are lumped with an $800 million bill for unpaid entitlements and our domestic tourism industry collapses as ticket prices exploded and services are cut. 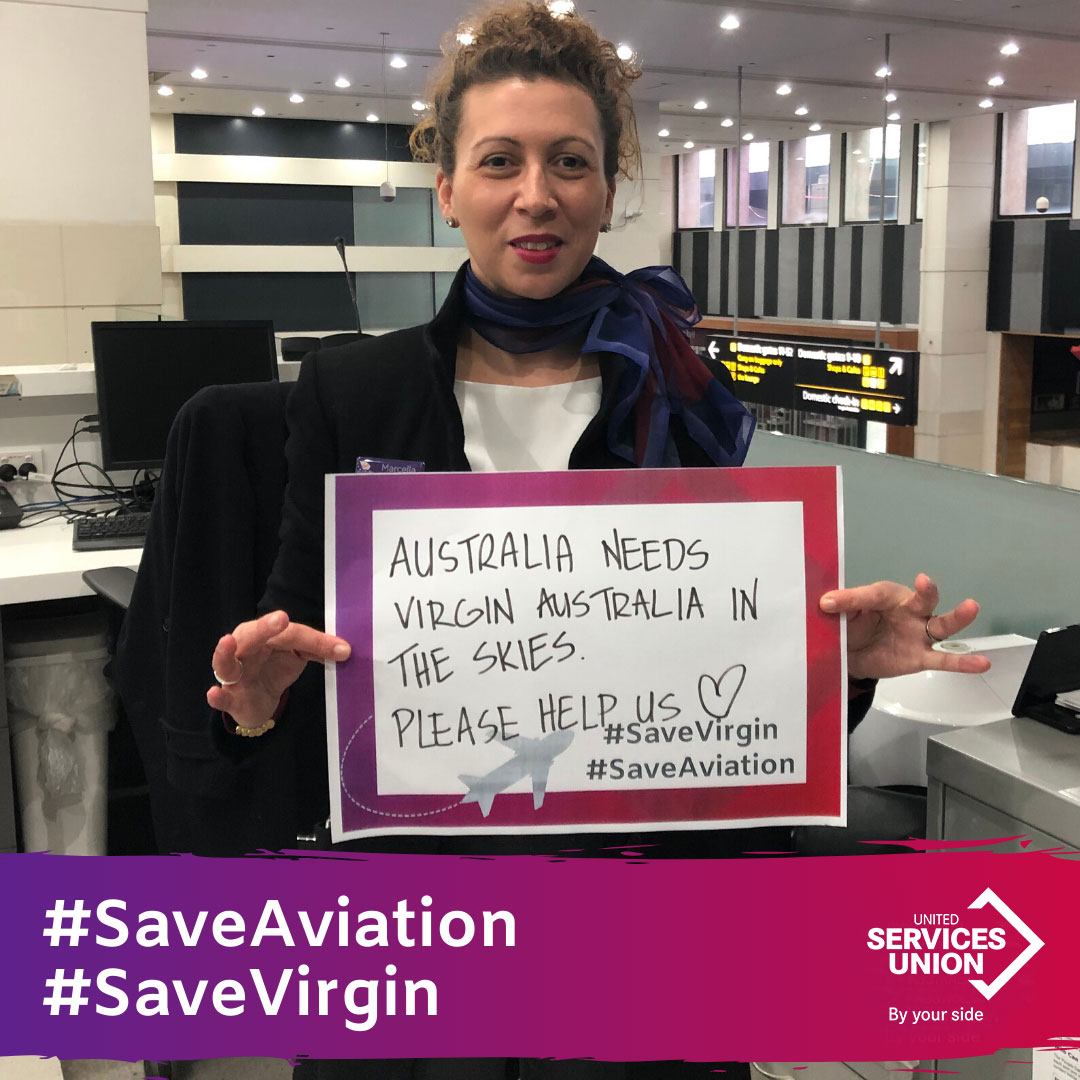 Workers like Marcella, who has worked at Virgin for 17 years in Guest Services, face an uncertain future.

But it is not too late for the Morrison Government to intervene and stop 16,000 workers, including USU/ASU members around the country from losing their jobs.

We’ve got to pull out every stop to get our message across to Scott Morrison – and that includes pressuring other members of Parliament who should have an interest in saving Virgin Australia for the communities they represent.

Click here to email MPs whose electorates rely on Virgin flights to stay connected to the rest of the country, and tell them that they must pressure Scott Morrison to act immediately to save the airline.

The Federal Government has a choice: save the jobs of 16,000 workers, invest in a national asset, and keep the sky fair for everyone, or choose to turn their backs on these workers and their families.

Let’s do everything we can to ensure they make the right choice, and stand together with USU/ASU members at Virgin Australia who need our support.

Remember: we are stronger together.