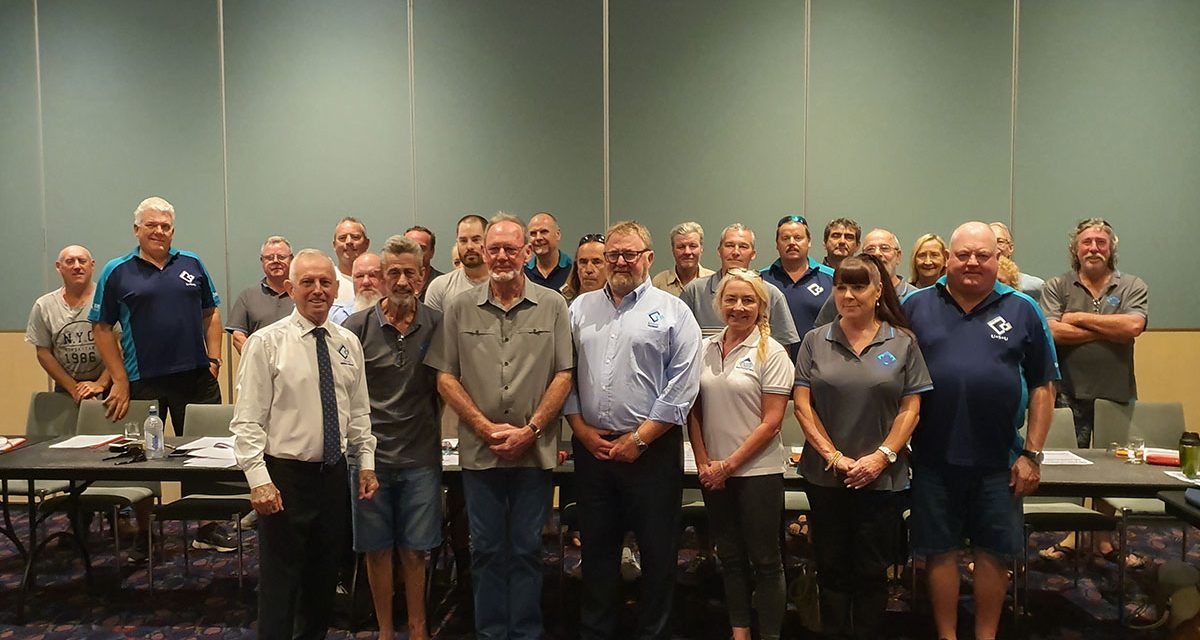 You can find out more about Phil and Greg here:

The following is the work history of Phillip Bowering in Local Government and Union involvement.

Phillip started employment with Sutherland Shire Council in 1978 as a plant operator and became a member of the then Municipal Employees Union within the first few months.

He left Sutherland Shire Council in 1982 to work as a plant operator for the Gold Coast Council who were at the time carrying a major construction project of installing the sewer system throughout the coast. Strange as it seems the Australian Workers Union who had coverage of operators on Council at the time accepted his MEU membership. After working 11-12 hour days and Saturdays for a year he left the Gold Coast Council and returned working for Sutherland Shire Council in 1983.

In late 1983 Phil became an MEU Delegate at Council who were at the time known as Sub Branches. He remained as a Delegate up until his retirement in August 2016.

During his time as a delegate he believed the structural change to the regionalisation of the Union into Branches was one of the most successful changes that the Union has undertaken. That change gave each workplace within a Branch a real voice in the running and direction of the Union.

Phil was at the original Branch meeting held in Queanbeyan in 1994 and was a mentor to many new delegates who over the years came on to the Branch. Phil was also instrumental in developing the Sutherland Shire Council Agreement in 2004 were he secured for members above Award entitlements. He was always there for members of the USU without question and would encourage Branch delegates to communicate with each other. Phil would always say, if they try something in one Council they will try it in all Councils, stay in front of the game.

In 1999 Phil was fortunate enough to be elected as the Executive member for the Southern Branch and remained in that position up until the 2015 Union elections where he decided not to contest for the position as he was considering retiring from the workforce.

During his 23 years as a delegate of Council Phil worked under five General Secretaries of the Union starting with Joe Cahill up until the present General Secretary Graeme Kelly and Phil can honestly say Graeme and his management team have made the United Services Union a truly professional and envied organisation by other unions. Phil may not have agreed with some of the decisions Graeme made over the years but he can honestly state that they were made for the benefit of the United Services Union and its members.

Greg Scott has been a long term member and delegate of the United Services Union who has provided countless years of service for the betterment of our members at Wollondilly Shire Council. Greg originally joined the NSW Municipal Employees’ Union in 1981 at Wollondilly Shire Council. After a number of years as a Union member in the early 1990’s Greg became a workplace delegate and was one of our members who helped establish the inaugural Southern Branch.

During Greg’s time as a delegate Greg became the President of the Southern Branch and was involved in the changeover period during the merger that formed the United Services Union.

Greg has always been a highly active delegate fighting for the rights of our members. Following the loss of several allowances in the State Award, Greg was able to successfully fight and ensure that some of these allowances are still paid at Wollondilly Council today. His fight, with the support of our members, provided numerous conditions above the Award provisions making Wollondilly Council a more desirable workplace. Greg’s effectiveness as a delegate was achieved because he had very strong support from Union members, he was a member of almost every Committee at Council, from the Consultative Committee to Work Health and Safety Committee.

Greg also knew the importance of keeping our membership strong at Council, in order to do this

Greg would ensure he approached every new employee at Council and encourage them to join the Union.

Since his retirement Greg has remained an active member in the retired members club. He goes above and beyond and still takes the time to assist in industrial matters in his former Council, still representing members with management and assisting the existing delegates with advice and history.

Greg has been an asset to our Union for many years and his presence is deeply missed. As a result we believe he deserves the honour of life membership.