Council’s management and employees are at logger-heads over the sacking of a worker last Friday, with the United Services Union yesterday vowing it would pursue an unfair dismissal case on behalf of the employee.

A mass meeting of about 60 workers on Wednesday afternoon unanimously called for the reinstatement of the sacked employee.

A majority of members present also called on Council to fire chief operations officer Anthony Misagh, who they believe was responsible for sacking the worker without “due process”.

A majority of members also moved a motion of “no confidence” in general manager James Roncon over the handling of a proposed drug and alcohol policy for staff, and failure to clarify statements attributed to him that 10 to 12 employees had left the organisation over the last 12 months after being held accountable for their performance.

The general manager posted a craft-ed statement online yesterday afternoon, expressing his disappointment that the matter was in the media.

“Council must consider whether it would be appropriate to allow the USU to dictate Council operations given that the majority of our workforce did not attend the meeting,” he said.

He said the union had not provided any evidence that the employee was sacked because he raised a health and safety issue.

“Our internal investigations and inter-views have also yielded no evidence to suggest the staff member was dismissed due to raising a WHS issue,” he said.

Mr Roncon said the former staff member had been employed on a probationary basis.

“Whilst the outcome is regrettable for all involved in this instance, Council is comfortable with the circumstances surrounding this matter, and is prepared to defend its position should it be further pursued.”

But USU industrial officer Stuart Geddes said the employee was on his last day of a six-month probationary period, and he believed no performance issues had been raised until that last day.

The general manager addressed the drug and alcohol policy.

“Our understanding was that the USU’s primary issue with Council’s proposed drug and alcohol policy related to the stipulation that staff abstain from drug use and maintain a blood alcohol limit of less than 0.02 during working hours,” Mr Roncon said.

“We maintain that this is a reasonable request given that staff operate a number of vehicles including heavy plant in public spaces. However we remain open to further discussions with the USU and its members regarding this policy.”

But the Mr Geddes said Mr Roncon’s statement about the union’s position was incorrect.

He said the union has never suggested that workers with a heavy vehicle licence shouldn’t be subjected to a blood alcohol limit of 0.02.

“What we are seeking is for employees, such as customer service employees, is legally be able to drive to work and perform their duties in regard to normal blood alcohol levels,” Mr Geddes said.

“Nor do we condone drugs in the work-place, and we have never had an issue with random testing either.

“Our biggest concern is that Council wants to implement a more punitive process that can lead to the quicker termination of employees.”

In the past six to 12 months, the union had made multiple attempts to meet with management and deal with some of the issues in regards to the policy, he said.

“We continually get lip service, or fobbed off, by the executive of this Council.

“That’s why we made the decision to approach the matter the way we did.

“It was not a decision that was taken lightly.”

Mr Roncon said it was also “regrettable” that the union had chosen to provide details of its campaign to the media, including the name of the chief operating officer, who the union is targetting.

“We really wish the union had simply come to us in the first instance and dis-cussed the matter rather than calling a snap meeting and immediately conveying the meeting’s outcomes to the media,” he said.

Mr Geddes said he met with the general manager in an attempt to resolve the issues the morning before the mass meeting of employees.

* The General Manager’s full statement can be found on Council’s website under “latest news” or you can find it via Facebook. 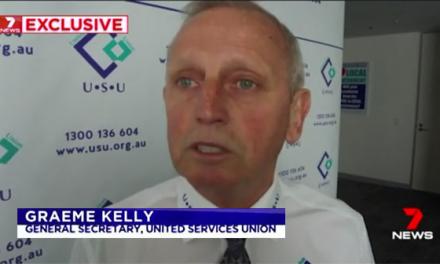