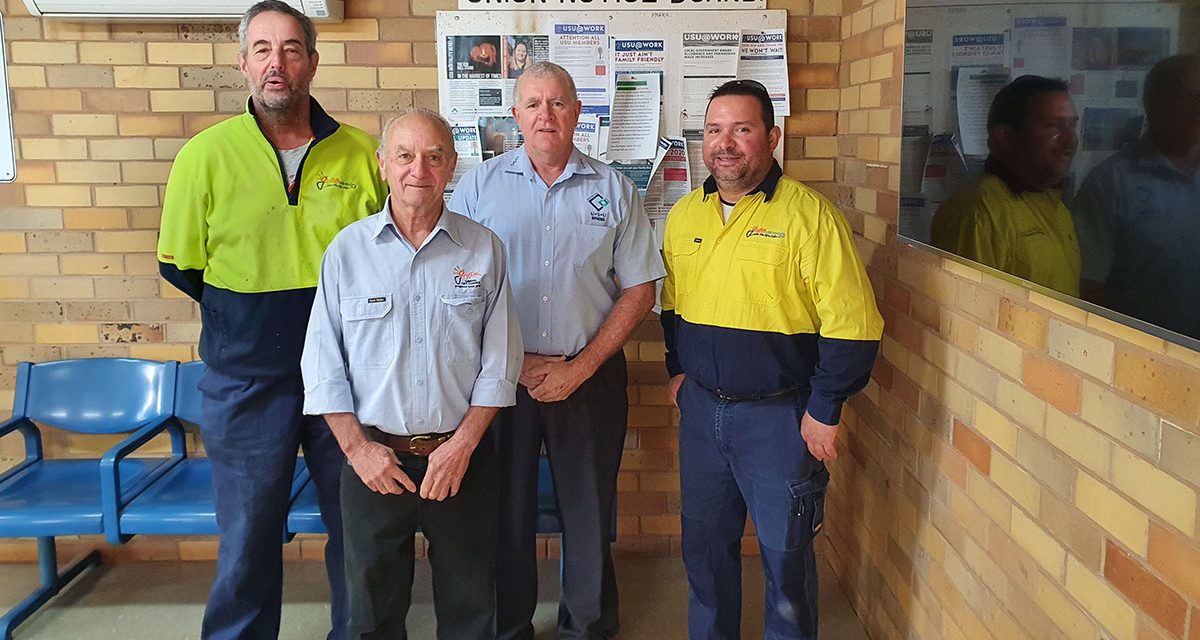 Last September the United Services Union hosted a breakfast at the Griffith City Council works depot to honour the service and union membership of John Catanzariti who has retired after more than 52 years of service and union membership. The breakfast was an opportunity for members to congratulate “Johnny Cat” and wish him well into his retirement.

Local Delegates Alby Bordignon and Michael Lentini organised the BBQs with a couple of capable assistants and breakfast was enjoyed by all.

After breakfast USU Organiser Brian Harrington thanked those who had helped and gave a speech to thank and congratulate John on his many years of Union membership. On behalf of the Union Brian made a presentation to John that he was extremely thankful for.

Members like John make it possible for the Union to have staff who provide representation for members, giving the union the resources that enable us to negotiate better pay and conditions for everybody in council employment.

John said that he had loved every minute of his time working at council and wouldn’t change a thing.

The General Manager Brett Stonestreet shared some kind words about john with the staff, stating that John’s 52 years of service was an amazing commitment. According to Brett, John was held in the highest regard by everyone at Council, always taking pride in his work and taking care of the plant and equipment he was entrusted to operate. He reiterated that John always had a smile on his face, never had a bad word to say about anyone and his positive attitude was infectious. He thanked John sincerely and told him that it was now his turn to have a break.

John joined the Union on March 11th 1968 after completing three months’ probation as a Carpenter’s Labourer. During John’s employment at Council he filled a number of roles. He was a Plumber’s Offsider, Tar Patcher, Loader Operator, Water Cart Driver, Truck Driver, back to the Water Cart again with his last role being Truck Driver/Labourer.

Paperwork is the biggest change that John has seen in his time as well as all the signage required when involved in roadworks. John said that while completing these tasks took time safety has been improved no end.

John appreciated the Union’s involvement in the issuing of uniforms becoming standard practise across the board. John said that in his earlier times people would come to work in a tee shirt and a pair of shorts. John mentioned that the issuing of safety footwear was a huge step forward.

John mentioned that people were a lot more aware of the affects of the sun nowadays and were conscious of wearing sunscreen, hats and other protective equipment unlike when he started all those years ago.

John has seen a large increase in the number of females in the outdoor workforce compared to when he started over 50 years ago.
John stated that he thought that people who didn’t join the union were silly and he encourages new staff to join their Union. John said that he enjoys being a member and that the Union had been good to him over the years.

When asked, John didn’t have anything negative to say about council employment and reiterated that he has loved his 52 years as a council employee.

John is looking forward to a quiet retirement with his wife Gail and is hopeful of seeing more of his grandchildren.

The United Services Union congratulate and thank John, and along with all members wish him a long and healthy retirement.